The Red Forest: The Most Radioactive Outdoor Environment on the Planet

A patch of mostly pine trees west of the Chernobyl Power Plant was hit by immense radiation, turned a rustic bright red and died: it’s still called the Red Forest today. Though early action helped contain the crisis, the danger can still be seen in 2020.

The Birth of the Red Forest

Just after midnight on the 26th of April, 1986, a steam explosion and ensuing fire at the Chernobyl Nuclear Power Plant led to the single greatest uncontrolled environmental release of radioactivity.

The blast collapsed the roof of Reactor 4, exposing the continuously melting core and spewing clouds of smoke, dust and radioactive particles into the atmosphere.

As depicted by Mary Mycio in her book, Wormwood Forest: A Natural History of Chernobyl, “Closer to the ground, the core sprayed radionuclides like a sprinkler, changing direction with the wind and contaminating patches of land around the reactor with shifting gradients that stain the radiation maps with deepening shades of mauve, rose, and brick.”

Just west of the plant, a 400-hectare section of pine forest received the most significant fallout dosage with radiation so intense that many of the trees died instantly, turning a rustic bright orange. The staggering variation in color earned the now world-renown name: The Red Forest.

Understandably, trees have a threshold when it comes to radiation, but how bad was the dosage? Based on the proceedings of the IAEA/WHO/EC Internation Conference in 1996,  the explosion and ensuing fire contaminated the soil, water and atmosphere with 400 times more radioactive material than the atomic bomb dropped on Hiroshima—and that’s a conservative estimate.

In her book, Mycio noted, “if Hiroshima released 3 million curies, Chernobyl spewed anywhere from 50 million to 200 million, although the most accepted estimate is the lower one. About 75 percent settled in the European part of the Soviet Union. The remainder sprinkled across the globe.”

For twelve days following the accident, radioactive plumes stretched well throughout the European continent, measuring anywhere from 2.0 mSv (Greece) to 12.0 mSv (City of Kiev)—as a quick comparison, a typical chest x-ray lands a dosage of 0.10 mSv.

Effects could be seen in radioactive boars in German and contaminated mushrooms in Bulgaria. In fact, thousands of polluted reindeer had to be slaughtered in northern Scandinavia due to their unfortunate eating habits of lichen, which efficiently absorb chemicals and nutrients from the air including radioactive elements from the cloud.

In the 1986-87 post-disaster cleanup operations, an initial team of 200,000 army personnel, local police and firefighters, and volunteer civilians were called upon to assist in cleaning and containing the accident. This group would later grow 600,000 strong, and would be known as the ‘liquidators’.

Increasing fear of the resuspension of radiated particles in the event of a Red Forest fire, launched a rushed mitigative effort to bury the radioactive waste.

A majority of the pine trees were bulldozed and buried along with radiated soil, litter and debris in 2-3 meter deep trenches by the ‘liquidators’. The trenches were then covered with a thick carpet of sand, sourced locally or brought in by Kamaz trucks. Planted atop were cover crops of pine saplings, birch, rye and shrubs, which aimed to keep the sand in place with an interconnected matrix of branches and roots.

Since the area around Chernobyl is known to carry groundwater close to the surface, many scientists continued to fear that as the trees decay, radioactive contaminants would leach into the groundwater, migrate to the nearby Pripyat River and subsequently reach downstream to the major Ukranian river, Dnieper.

Hundreds of thousands of people had to be permanently evacuated, including the entire town of Pripyat, forming the 2,600 km2 (1,000 sq mi) Chernobyl Exclusion Zone where the Red Forest lies today. 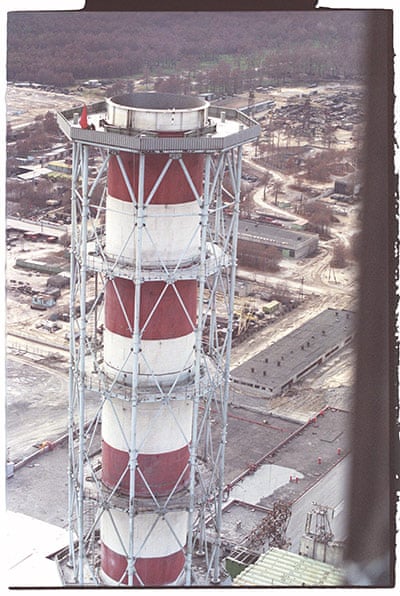 Experiments were conducted in controlled burning of forest and grassland throughout the zone, proving the existence of an increased risk of the inhalation of radioactive particles, while potentially redistributing contaminants in and around the area.

In a 2014 interview between Smithsonian Magazine and active Chernobyl biologist, Tomothy Mousseau, Timothy stressed the fire risk of 27 years’ worth of leaf litter, explaining, “there is growing concern that there could be a catastrophic fire in the coming years.” Little did he know how brutally accurate his prediction would become.

The Great Chernobyl Fire of 2015

Although small forest fires in the Chernobyl exclusion zone occur regularly, the April 2015 fire was a particularly awful mess. 400-hectares of uncontrolled forest fire came just 20 kilometers from the abandoned nuclear power plant, threatening an even greater release of radioactivity.

Of the previous 50% forest cover in the area before the accident, trees and brush cover over 70% of the exclusion zone today. Fire prevention and fighting capabilities are critical to reducing risk of radioactive redistribution.

Armed with binoculars, compass and radio, Unkrainian army personnel actively scan the wilderness for signs of smoke in makeshift fire lookout towers. One such tower can be found in the Parishev village.

How Radioactive is the Red Forest Today?

Active experimentation in the zone assists in answering some of the toughest questions about the Red Forest. Most recently in April of 2019, a team of experts led by the National Centre for Nuclear Robotics (NCNR) spent two weeks surveying the Red Forest and its surroundings.

Using LIDAR technology to measure the landscape and gamma-ray spectrometers for radiation levels, the team flew unmanned aerial vehicles (UAVs) in patterns, mapping our 15 square kilometers within the zone. Only through the use of these aircrafts were they capable of reaching record close distances without exposing researchers to radiation.

Their discoveries found hotspots of radioactive material that don’t appear on official maps. And though many parts of the zone are showing signs of decreased radioactivity, in some cases disappearing completely, 90% of radioactivity in the Red Forest still remains in the soil itself. Knowing where it’s safe to travel is a vital step to reclaiming the area.

Too hard to believe? Come see it for yourself.

Chernobly might not be everyone’s first idea of a typical vacation destination, but each year brings upwards of 70,000 tourists to the exclusion zone. Guided tours to the radioactive Red Forest are also a part of the attraction.

In fact, The Red Forest is one of the first stops on our Chernobyl Two Day Tour. Though walking inside the forest is strictly prohibited (and downright dangerous), one can stand at the edge and peer into the jaws of this modern marvel.

What is the Red Forest?

The Red Forest comprises 400-hectares of irradiated pine forest caused by the aftermath of the Chernobyl Nuclear Power Plant accident.

Where is the Red Forest located?

The Red Forest can be found just west of the Chernobyl Nuclear Power Plant.

Can you visit the Red Forest?

Absolutely, tours are provided year round, although walking inside the forest is strictly prohibited.

How radioactive is the Red Forest?

Radioactive hotspots vary inside the Red Forest, and have been measured anywhere between 0.1-10.0 mSv/hour.

Did we miss something? Drop us a line and we’ll be sure to include it.

When you visit and / or interact with our website, you are subject to the collection, processing, and use of your personal privacy policy data, as well as to the use of cookies by CHERNOBYLwel.come